Weekly Thoughts from our Rabbi 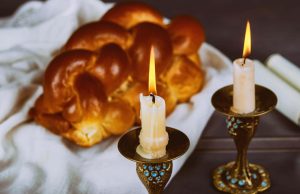 Mirrors all around us!

Jacob flees from his brother, Esav, and finds

his way to his Uncle Laban’s house, where

he hopes to find sanctuary, peace of mind and a wife.

At the well he meets Rachel, coming with her flock,

and instantly falls in love. He asks his uncle for her

But it’s another name for the moon, which is white. But

what does the moon do? It reflects the light of the sun.

Laban plays the role of a mirror to Jacob, reflecting back

played on his father and brother. So Jacob must work for

Laban seven years for Rachel’s hand in marriage. Being veiled,

Jacob does not recognize his bride until he wakes up in the morning.

But to his amazement and utter dismay, he discovers that he actually

was now married to Rachel’s older sister, Leah! Laban pulled a switch on him.

How does that feel? Not so good. He is learning about the laws of Karma,

or what we call in Judaism, “midah keneged midah (measure for measure).”

This is part of Jacob’s learning process. This is necessary for his soul’s growth.

Laban was a human mirror for Jacob, reflecting back to him so he can learn

important lessons. To be a Tzaddik, one cannot be a deceiver. He still has

much to learn. People we meet in life just may be the human mirrors we need

in order to learn important lessons. One day we may even thank them. Or not.

In Homeric Greek literature Achilles is seen as the ultimate hero.

The Greeks saw heroism in combat. Achilles’ vulnerable weak point was his heel. The Bible

saw heroism in holiness, a mortal combat, if you will, asserting the forces of light over

those of darkness. Jacob’s name in Hebrew means “heel,” both in the sense of the actual anatomy

as well as one given to treachery and deception. How so? He shares his lentil stew with his ravenous brother

only on condition that Esau sell him his birthright. And for the actual blessing of the birthright itself,

he masquerades as his brother to deceive his blind father into blessing him instead. Like Achilles,

his weakness lay in his heel, i.e., in his heel-like nature. It took some twenty years of suffering under

righteous. Upon that change in his nature, the wrestling angel renames him Israel – one who wrestles

with G*d (and overcomes his nature). We can spend a lifetime wrestling with our lower natures our

various ego driven, id dominated selves. Freud himself had many works of Kabbalah in his library!

Into this world to fix. Before we can do Tikkun Olam, repairing the world, we must do Tikkun Neshama!

Fixing ourselves! Not so easy. Thus the religion of Israel, the religion of Judaism, is the lifelong struggle to become a mensch, to do the right thing by G*d and by our fellow creatures. The Bible is not shy at all in showing the

faults and imperfections of our faith’s founders and exemplars through the ages. What we should identify

with are not their faults and imperfections, but with their spiritual evolution in overcoming them. Most

faiths put their founders on a pedestal. We, by contrast, put their faults on display! But that is only so that

we may learn from them and take comfort in knowing that while we ourselves may be imperfect, we should

never feel intimidated in undertaking our own mindful and conscious effort to work on ourselves. Never give up!

Even if it takes a lifetime of wrestling, it is the very wrestling to do better which is both our Jewish and human calling, as well as our soul’s calling. Lastly, in Jacob’s defense, his mother Rebecca took the blame for Jacob’s stealing the birthright blessing from his brother and tricking his father. She intuitively knew that the gestalt of

Jacob’s overall character was more suited to Abraham’s covenantal mission. So the bottom line is, “listen to your mother. She knows what’s best!”

Can you imagine a deity who puts the honor of His creatures above his own? Well imagine no more! Abraham was in his third day – the most painful phase of recovery following adult circumcision, Brit Milah, the sign of the covenant. G*d was visiting Abraham – a mitzvah!, providing comfort and aiding in the healing process. G*d was talking to Abraham, when suddenly, Abraham notices three wandering weary pagans approaching his tent. Without even an “excuse me, oh Deity,” Abraham runs to greet his new guests and wash their hands and feet and arrange a banquet on their behalf with the choicest bread, leben and veal. Wait. What? He hung up on G*d and went to wash and feed some holy schleppers? G*d smiles when he sees His creatures showing loving kindness to one another. Let us be like G*d. No, I mean we should be like Abraham. Okay, we should be like both!

Look within – who ARE you?

This week’s parasha is Lech Lecha. G*d and Abraham are forming a relationship. Abraham is a disruptor. He discovers that there is but one G*d who actually cares about us and cares about how we treat each other. How revolutionary! In return, in Genesis 12:3, G*d says regarding the children of Abraham, “I will bless those who bless you and those who curse you I shall curse, and you shall be a blessing to all the families of the Earth.” The Jewish people are but .02% of the world’s population and yet our contribution to the welfare of humanity is immeasurable. We are indeed a blessing. But many look upon us with jealousy and replace inspiration with hatred. Lech lecha literally means “go to yourself.” G*d is telling each of us to look into our deepest depths and see the beauty and holiness within and a vision of what the world could be one day. Now go fulfill that vision! Despite the haters, we will never give up being who we are or our mission in life to improve the world.

Dealing With Trauma and Addiction:

The Babylonian Epic of Gilgamesh also has a flood narrative recording a great flood catastrophe similar to that of Noah. But while its narrative is amoral, the Hebrew version links the conflagration to humankind’s moral shortcomings and the proliferation of evil. Water is healing and refreshing, but too much of anything is harmful. Drugs are carefully calibrated to the necessary dosage for healing. Fentanyl, the great scourge of today’s youth, is harmful and fatal at any dose! Wine in small amounts brings cheer and gladness. But even Noah succumbed to an alcoholic stupor shortly upon leaving the ark! As the progenitor of mankind he passed on a genetic predisposition to addictive behaviors, especially in response to trauma. What could be more traumatic than witnessing the near extinction of all life on the planet? Jews who grew up from a young age allowed wine for ritual consumption, tend not to develop alcoholic addiction. However, Jews raised in secular environments where alcohol remains taboo for minors, tend to develop alcoholic addiction in equal numbers to the general population. This goes back to Adam and Eve, from last week’s parashah. Anything seen as taboo becomes the focus of desire and longing. They could eat the fruit of any tree in the garden, yet that which was pointedly off limits spurred their greatest desire. As Maimonides teaches, the Golden Path of Moderation, the Shvil HaZahav, is the ideal by which we should live in all matters.

One Heart; One Love!

This week’s parasha, Genesis, is the first parasha of the new year, as we begin a new cycle of readings following the joyous festival of Simchat Torah. The Midrash teaches that all humanity is descended from one Holy couple, Adam and Eve, so that no one can say, “my father is greater than your father.” There can be no room in our hearts for racism or bigotry.  G-d gave us two eyes, two ears, but only one heart. To quote my rabbi, if I had two hearts I could use one for hating and one for loving. But since I only have one heart I only want to use it for loving! We all come from one human father, and so too, do we all come from one heavenly father. We are all brothers and sisters! Shabbat Shalom!